This type of Decision Point allows you to freely set as many paths as you want, based on form Fields or data that is entered previously in this Process.
The other types of Decision Points (Approval & Multiplier) can only be inserted after either an Approval or a Multiplier Step.

Select "Normal" as Type in the selection box & click on

Changing the Type, will result in a total loss of entered Paths for this Decision step!

Workflow Paths can now be added to the decision step.

to add the first entry.

Paths are deleted by clicking on the

button for the Path.

Next, Rows are added to each Path to define the conditions required to activate the path. Click on

1. Source : The first field determines the source value for which the rule in the Row will be built.        The available Source selections are as follows.

- Previously Entered Field : A value entered in one of the form prior to this Step, in the same Process.

- Lookup : A value entered in any of the forms.

- Value from webservice call : as defined in a previous step

- Ticket field : Any field from the Ticketing module

2. Data field : When the source (first drop down) is selected, the next drop down field will be updated with corresponding source data.  Complete the second drop down. Please select the correct data field that will be compared against the benchmark ( final field).

For example, if 'Lookup' is selected in the first fields ('source'), this list will show all Forms in SSP.

3. Item selection : select the wanted 'data'-element from the list. This list is filtered against the selected 'data field'

For example, if a Form is selected in field 2 ('Data field'), the list of FIelds of that selected Form are shown in this selection list.

4. Benchmark:  This is used in the Row definition to compare against the selected data field.

It can either by a 'Fixed value', that is entered in the text box. Or it is a 'Dynamic value', created based on the same sources as the first part of the condition.

If a Path has no Rows, it is considered as 'Else', so it will take all other options, if not met by any of the previous Paths' Rows. If you insert an 'Else' Path, please do so as the last Path. If you put it first, it will take all tickets and not look at the other Paths anymore.

Adding multiple Rows in a Path

Multiple Rows can be added to Paths to define additional conditions. The possible connectors are :

For example, this rule setup :

This means that these settings are valid for this Path:

In the example above, if the administrator wanted to only allow the combinations 'brown & 1' and 'brown & 2', the setup above will not work. We advise to split thus in 2 Decision Points.

SSP supports multiple Paths that are started at the same time. If the Rows for Path 1 a Path 2 are both valid, both Paths will start. The only exception is an 'Else' Path, without any Rows. Once an 'Else' Path is found, going through the Paths from top to bottom, SSP will stop looking at the Paths after the 'Else' Path. So always put the 'Else' Path as last.

This following sample shows a Decision Step containing two paths, each of which having one Row: 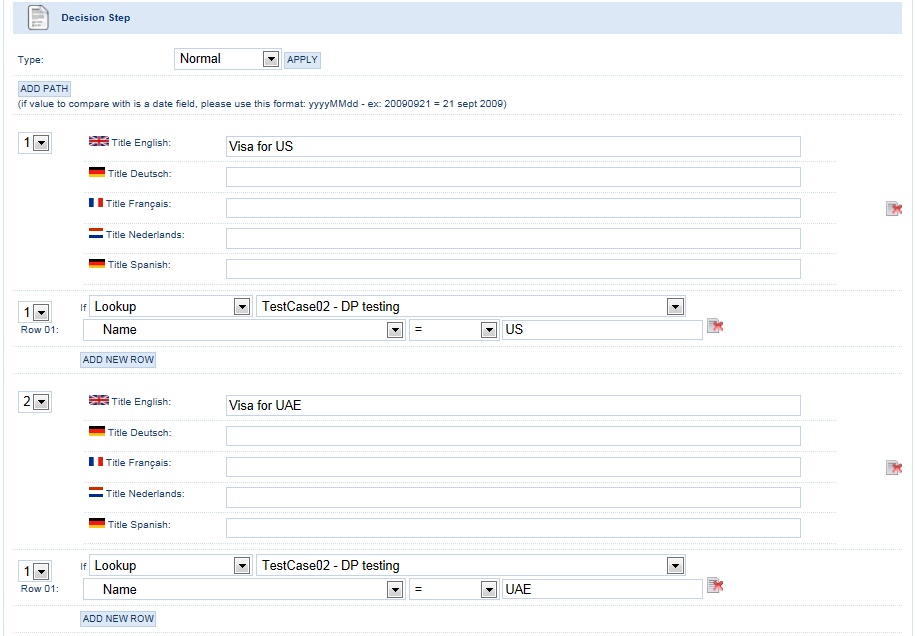 The Decision Steps in the Steps Overview is displayed as follows. 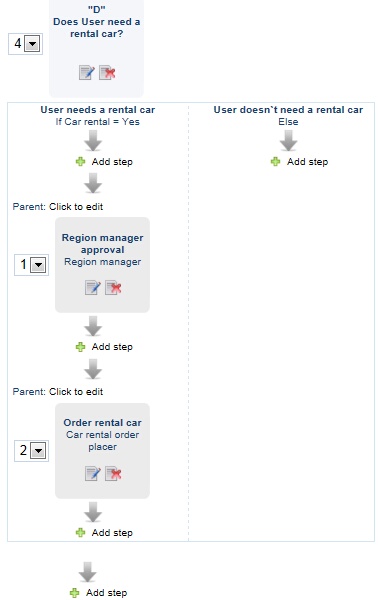 The Decision step has a title of "D" in the step.

The two paths are displayed side by side separated by a dotted line.  The Paths are merged by adding a Step outside the blue box.