For each entity (form, process, datastore parameter and web service), a detail page is available to see elements to be imported and their individual notifications, warnings and errors: 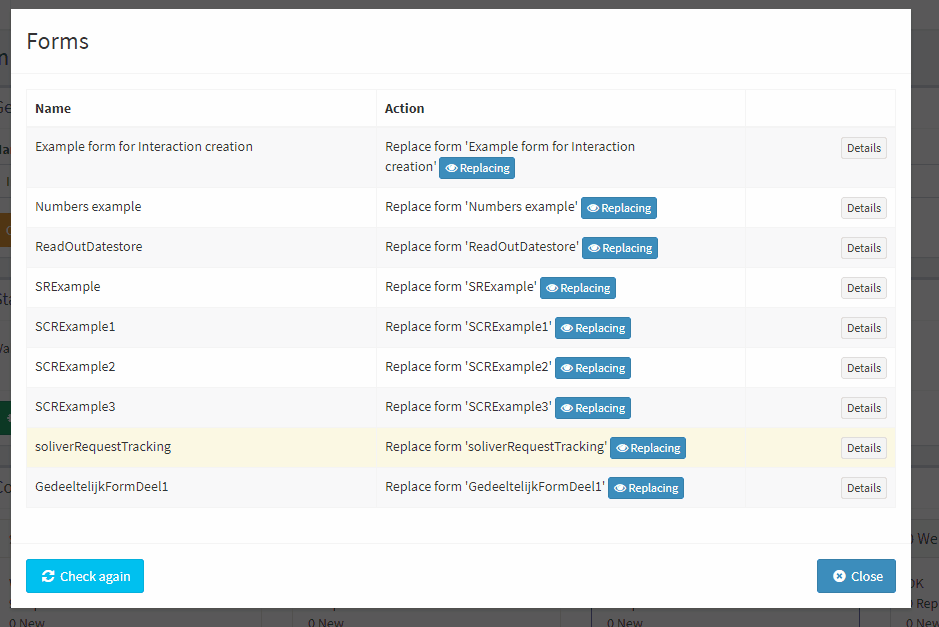 When clicking on the 'Check again' button, the quality review is done again for the items in the list. After finishing, the import home screen is shown.

When clicking on the 'Details' button an overlay popup is opened that shows the import impact for the individual element.

Each element that is included in the release can be checked in detail. The following information is shown (when available for the element):

Once all errors have been fixed, the import of the release can be started. The import will not start immediately and will be scheduled. Once the import task runs, the import is done in this order:

In case an element is added to the target system, the standard import process takes place, with the following specifics per entity:

The replacing of existing elements always happens in this order:

After a form is imported and it replaces an existing form, the old form is moved into retirement mode. Retired forms will have no linked topic. Retired forms can never be active. Within a form, retired versions can be found in a new tab:

When going to this tab, a list with forms is shown with the following information:

The tab is only shown in case there are retired versions. When going to the tab, a list with processes is shown, that can be opened from that place. For the retired versions the following information is shown: